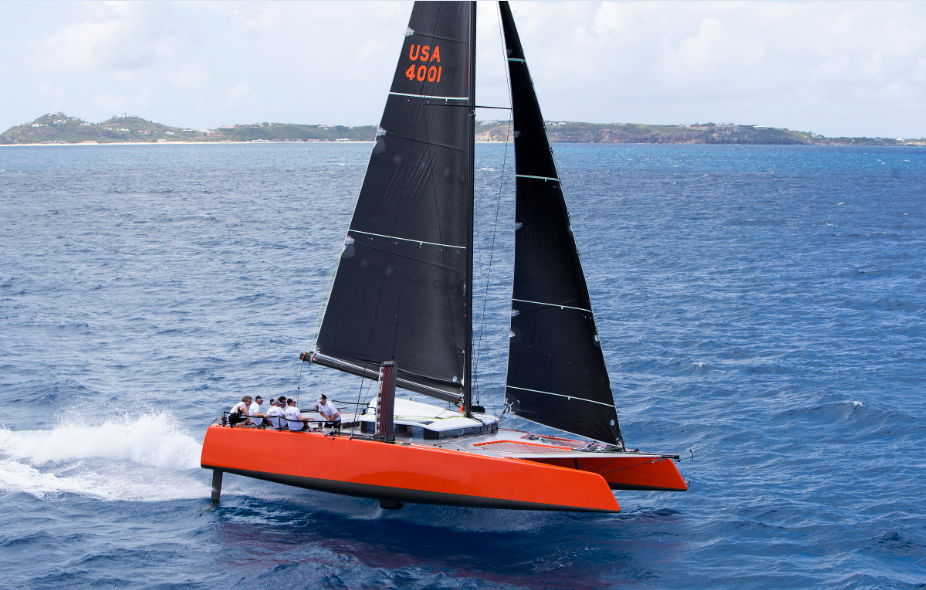 Next level yacht design with ThinkDesign.

In 2013, DNA/Holland Composites invited independent Netherlands based industrial designer Rudo Enserink to lead a team of sailors and engineers to develop a new 40-foot catamaran from idea to market. What started off as a super sporty coastal cruiser ended a year and a half later as a state of the art, fully hydro-foiling super-fast catamaran with sleeping space for up to 8, a full blown galley and ample storage. ThinkDesign proved to be the perfect design tool to design the Holland Composites build G4.

As foiling technology for racing sailboats is really new, as demonstrated in the 2013 America’s Cup, developing a foiling cruiser with developments happening all over the place requires quite some flexibility from the design toolbox. ThinkDesign CAD provided a solid and flexible environment that could host both the highly advanced surfaces needed for hulls and foils, as well as lots of technical components varying from imported geometry of electric drives and sailing hardware to newly developed hydraulic main sheet control pedals and foil rake adjustment systems.

Enserink sees himself more as a design Swiss army knife than a specialist yacht designer.
Together with composites engineer Pieter Jan Dwarshuis from Holland Composites, they laid out a molding and assembly system that clearly served two goals: to bring the light ship displacement of the vessel down below 3 metric tons without compromising strength and stiffness of the platform, and to have a mold system capable of reproducing various versions of the G4 at industrial speed and quality.
This resulted in a highly complex carbon fiber tooling set that enables fast and effortless assembly. Due to the high surface accuracy and precise manufacturing of the tools and parts, just a bit of filler is needed before the paint job is done. 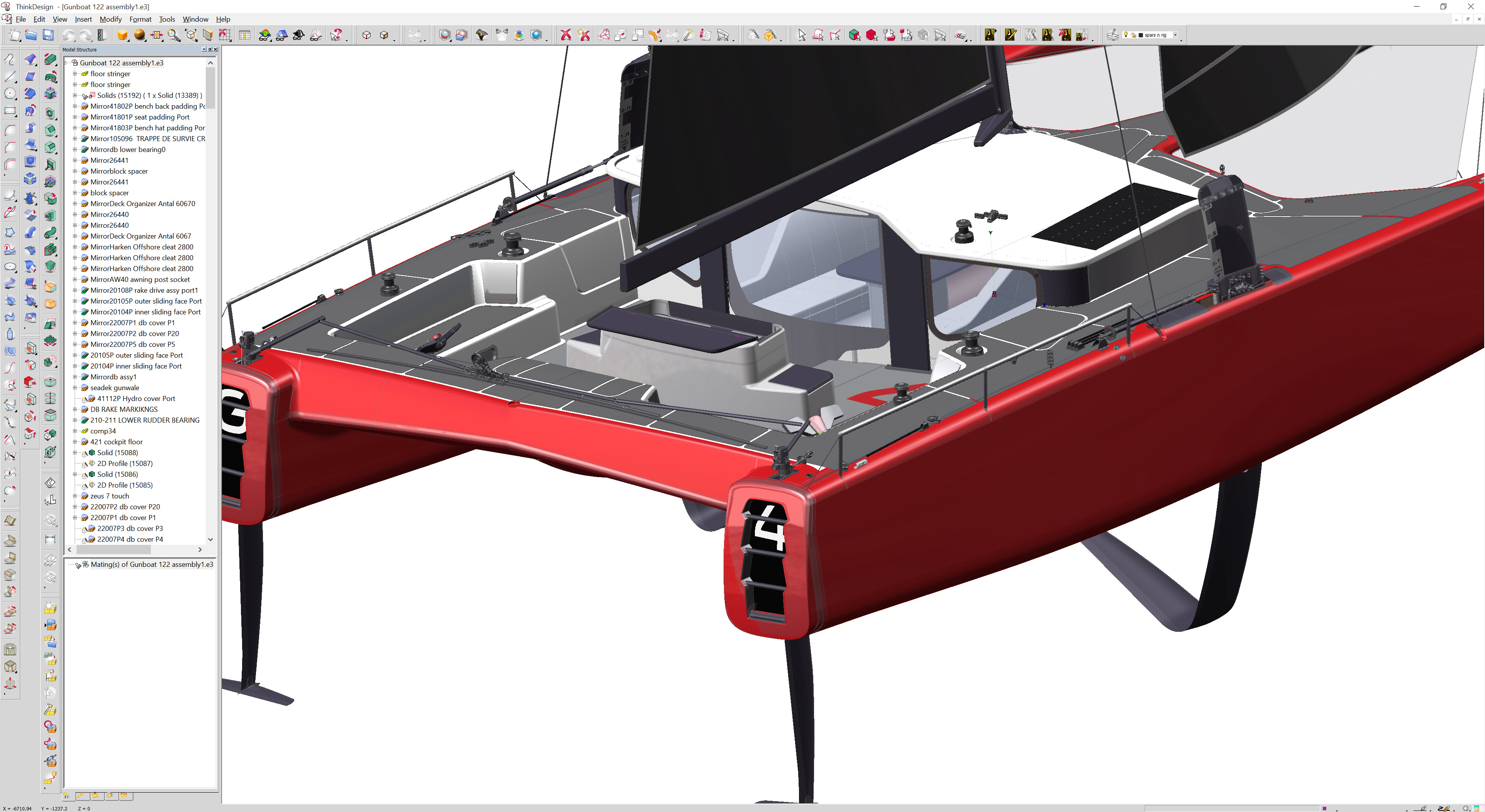 The prepreg carbon and Nomex hull was an immediate success in the Caribbean racing circuit. In both the races of St. Barth and Antigua, the G4 scored very high points against much larger vessels.
Rudo Enserink is delighted with the success of this project. “It was design team member Mischa Heemskerk who kept pushing the hydrofoiling stuff. He’s an amazing sailor with lots of experience converting smaller catamarans on hydrofoils. We took quite a risk when we decided to put her on foils. That happened around half way in to the design process, at a point where the molds for the hulls were already made. I had a feeling this changeover was going to happen so I prepared the mold divisions and deck line in such a way the foiling stuff could be easily placed”.
He explains: “Giving the unique character of this ship it was quite a gamble to tell where the foiling dagger boards were going to be, so we decided to design a very large dagger board case that could hold these boards at three positions, about 30cm apart, enabling us to balance the boat perfectly for foiling without having to open up the hulls. Obviously, keeping control of the design at hand with so many changes and new ideas requires CAD software that can keep up with this.” 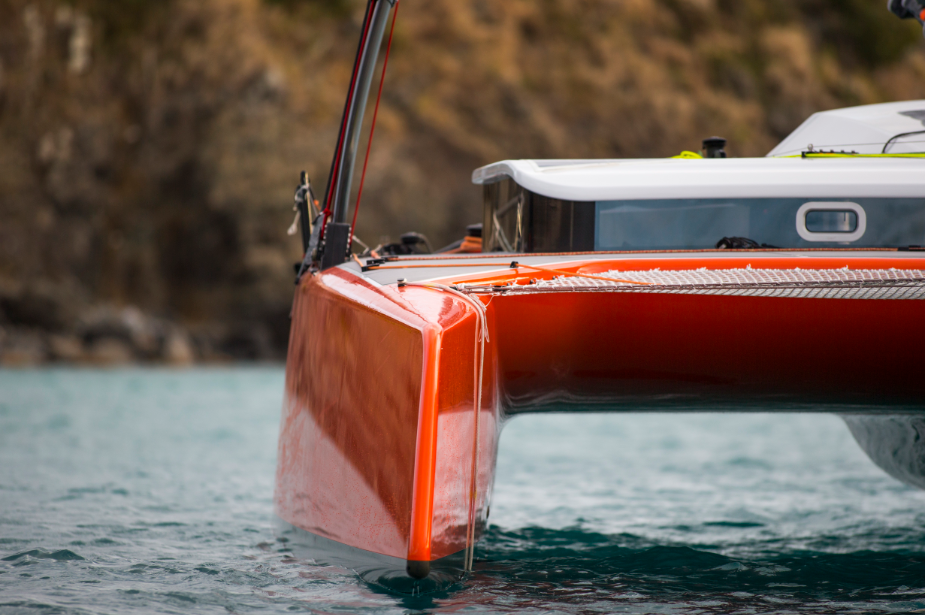 ThinkDesign proved to be pivotal across the development and build of the G4. “On one day I’d be calling the CNC plant who mills the tooling plugs, the naval architect who wants input for his FDM and some systems supplier to get 3D files for importing, while the sales people were asking for renderings to show the prospective buyers” Enserink says. “Time and time again, the ThinkDesign exported 3D files turned out to import into other systems flawlessly, with great continuity control and manifold parts”.

The main shape of the vessel is modeled using associative curves and surfaces that are then combined in to solids. This allowed Enserink to set up a model that could easily be changed following the many evaluations yacht design brings about. “As we learned more about the ship we were designing, we needed to make slight changes to the center of buoyancy and bulkhead locations. If I had made the model with fixed surfaces, I would have gone crazy and would probably have caused weeks of delays redoing my work. Because the hull shape is controlled by just a few curves with only 4 to 6 control points each, I could tweak and tweak and the model would update instantly.” 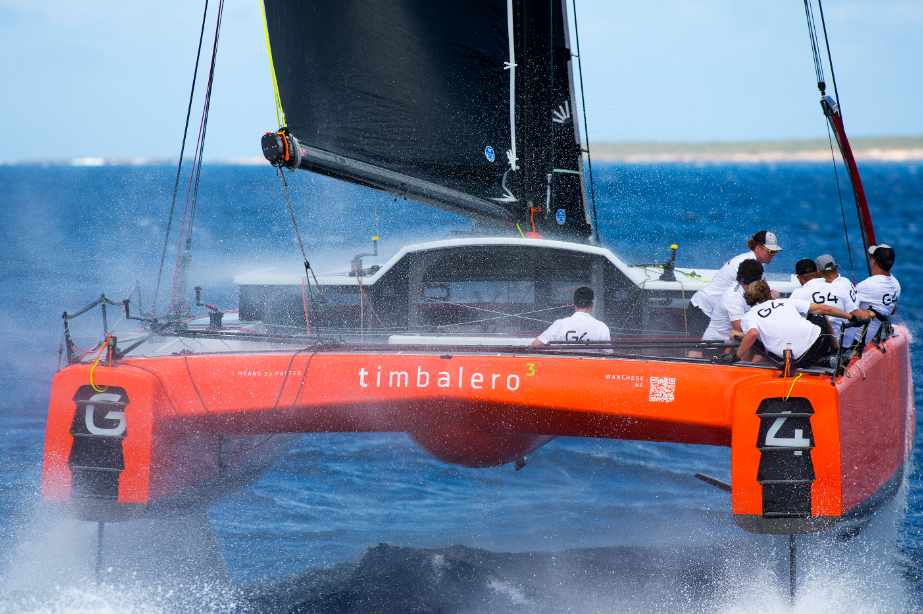 Enserink had tasked himself with keeping a modern, racey yet functional look. “I had to fight some battles with the boat people on this. I know how to sail but I was surrounded by people that probably spend more time on the water than on land, and they have a culture of their own. I tried not to blend in too much by doing what everybody does; I kept defining the shape of the yacht with the sailor in mind. Everything and every dimension has a function, and having people move about on the boat comfortably and safely had my top priority. There is very little ornamentation on this boat but I think I succeeded in sculpting something that will have heads turn for years to come.
There is no way in the world I could have pulled this off without ThinkDesign as my trusted CAD!”

About Rudo Enserink:
After his graduation from Delft University of Technology as Industrial Design Engineer in the early nineties, Rudo has been designing everything from musical instruments to liquid dispensers and from LED luminaires to A-class catamarans. He has been using ThinkDesign since the CadLab days.
www.enserinkdesign.com

About Holland Composites:
Founded in 1993 by industrial design engineer Pieterjan Dwarshuis, Holland Composites has been steadily growing from a garage shop to one of the largest composites facilities in the Netherlands. Current capabilities include a 6*2,5m autoclave, a 30*6m calibrated glass table and an XXL waterjet cutting machine, alongside an all-star core team of 25 composites professionals. A strong product mix of making industrial specials, building components and sailing crafts, with a strong emphasis on development makes Holland Composites a truly unique tech company.
www.hollandcomposites.nl