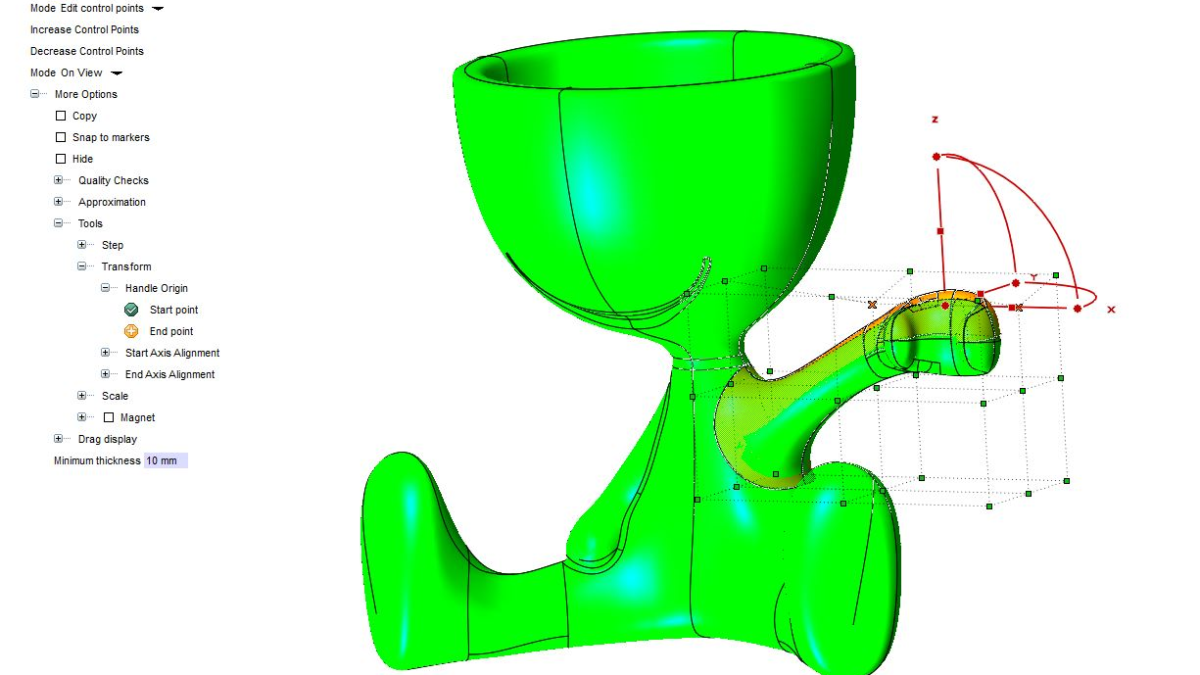 Let’s go on with our discussion on the “Top Ten” features with a further article on Global Shape Modeling (GSM). This time we will focus on the free-form changes by using the two commands of global planar deformation (Planar Bounding Box) and Global 3D Bounding Box.

In the previous article, we mentioned the potential of global modeling and the rapidity with which it is possible to change even complex shapes.

Changing style shapes is complicated and time-consuming because of the frequent limits deriving from the technology and the modeling approach used. The operational difficulties in implementing the modifications and the tight deadlines imposed to the designer, limit the “freedom to change”, and sometimes the designer is forced to give up searching for alternative solutions and improvements.

Especially in the initial phase, where the evaluation of the style requires a continuous rethinking, besides speed and flexibility, the changes to the shape can follow a creative approach and ignore certain restrictive constraints of size and shape.

Planar Bounding Box and 3D Bounding Box are two essential features of Global Modeling. Based on a free-form approach, they allow you to change any geometry and 3D shape with the maximum freedom. Thanks to a grid of points arranged on a plane (if you use the Planar Bounding Box command) or a 3D-grid of points making reference to the dimension box of the shape that is under modification (if you use the 3D Bounding Box command), you can move the points and get a 3D deformation of the object. At first, it is necessary to work on a limited number of points that can be increased or decreased according to the level of flexibility and control that you want to keep on the modification. 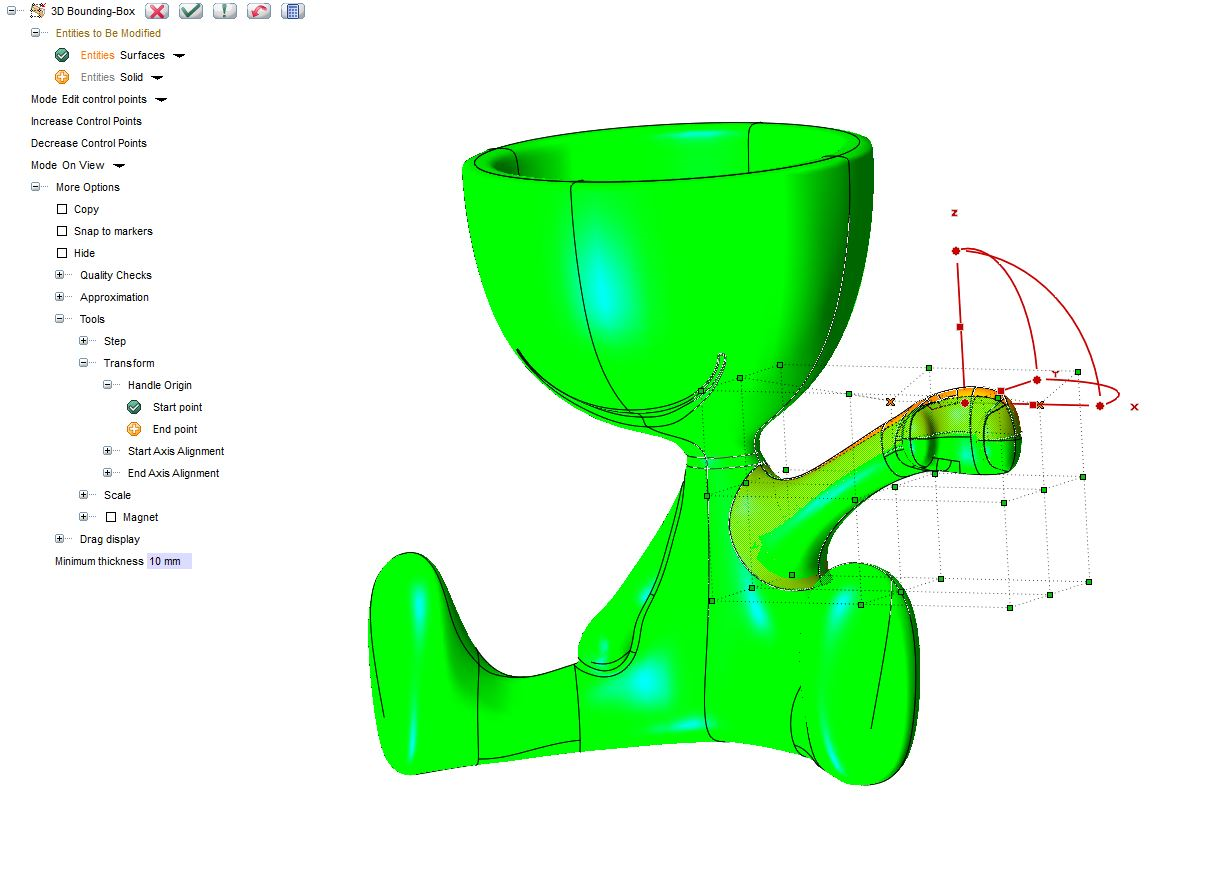 The change carried out in this case, has an impact only on the shape, regardless of the type of geometry on which you are working, whether it consists of curves or trimmed surfaces. This intervention will leave the quality and continuity between the faces or the modified curves unchanged.

Let’s assume, for example, that you want to change the shape of a set of curves in the upper section of the tap in the picture below, to get new targets or new reference curves. The traditional approach of changing the control points of the NURBS curves would involve constraints due to the complexity of the curves and the relating distribution of the control points. Moreover, it would be necessary to maintain the internal continuity between the different curves. The only alternative would be to “simplify the curves”, by reducing the number of control points. But this would result in a significant change of the curves which would lose their original appearance. 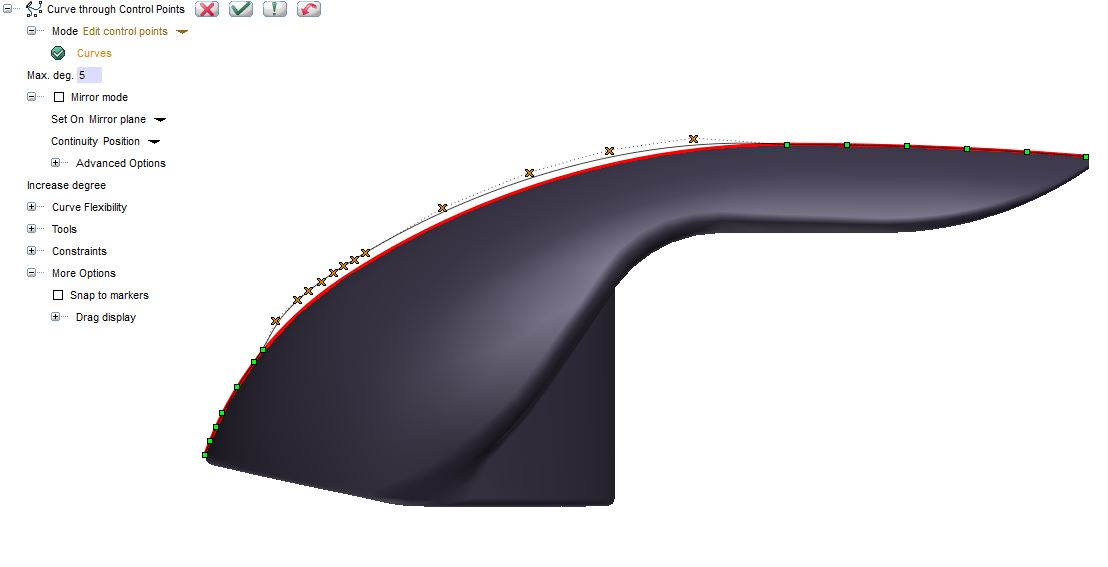 Modification of the NURBS by control points

Using the ‘Planar Bounding Box’ command, you can ignore the complexity of the NURBS you want to change, and freely work on a grid of points distributed on a plane and simplified as much as you need. The ‘Decrease/Increase Control Points’ functions of the grid allow you to check easily and quickly the shape of the changed curves. Since the ‘Planar Bounding Box’ command produces a free-form change, no constraints are deliberately imposed at the endpoints of the curve chain. As a consequence, changing the shape of the curves becomes a quick and extremely flexible operation. Finally, using the editing commands you can eventually restore the continuity of the curves according to the new shape.

Modification of the curves through the GSM – Planar Bounding Box command

The GSM commands, described here above, represent a new methodology for evaluating the style of the product. They allow you to make changes quickly and accurately at the same time, and create models that keep the initial continuity between the faces, even in imported geometries. Moreover, thanks to the new rapid prototyping techniques, the time elapsing from the first idea of change and the actual final implementation of the prototype can be measured in hours against the days/weeks required with a traditional approach.