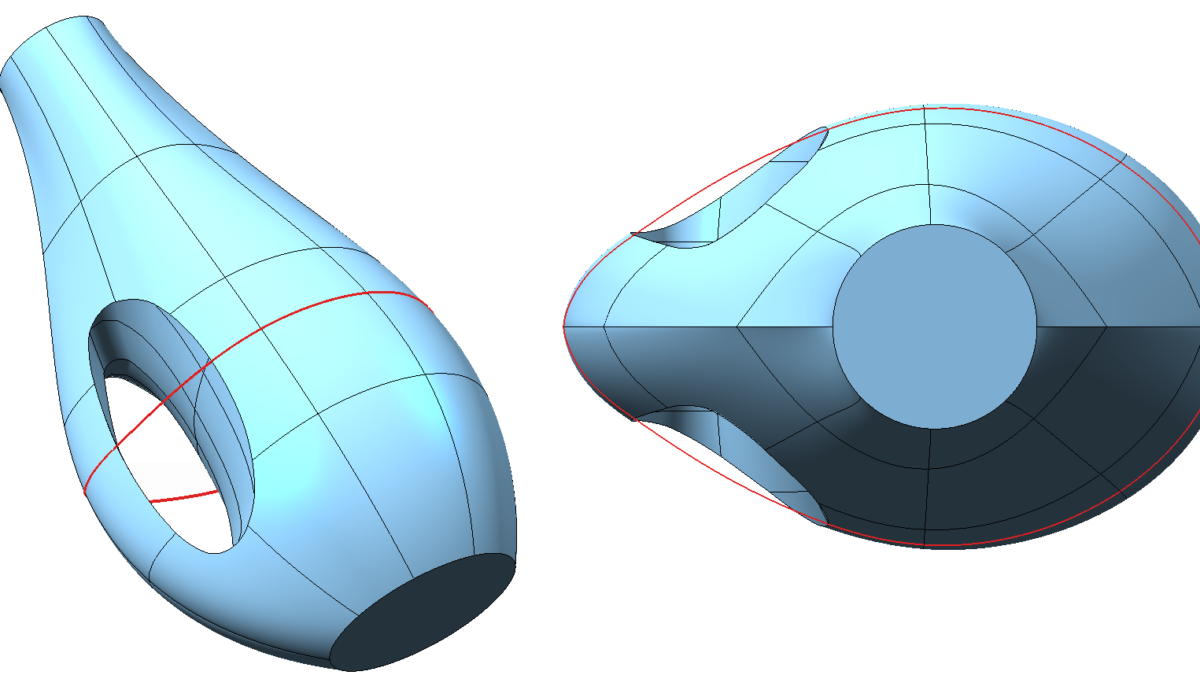 Let’s conclude our “Top 10” set of articles on ThinkDesign’s features with the last in-depth analysis on Zone Modeling and Zone Draft.

The Zone Modeling extends the potentialities of Global Shape Modeling, allowing you to apply all GSM functionalities to the selected zones (faces) of a solid model. This innovative technology can be used effectively to change locally and a posteriori all kind of solids, whether in native or foreign format, maintaining complete associativity and requiring less overall time than the traditional approach.

This approach is particularly useful for designing consumer products where the style characteristics represent a high added value and they sum up to the mechanical and functional characteristics of a product.

The unique flexibility of the Zone Modeling feature allows designers to apply controlled changes to a certain area at any time of the manufacturing process and to propagate them to the subsequent features already present in the model, without redefining them.

The Zone Modeling provides users with very advanced tools to modify 3D shapes. In particular, it is possible to take advantage of the Advanced Zone Modeling command (AZM) to apply a local modification to selected zones of a parametric model or to add a draft angle to more or less complex solids by using the Advanced Zone Draft command (AZD).
Both commands allow you to directly interact with the Model Structure (Hierarchy Tree), modifying not only the geometric structure but also the topological one, which defines the model properties.

Let’s have a closer look at the potentialities of the Advanced Zone Modeling command when used on a parametric model! 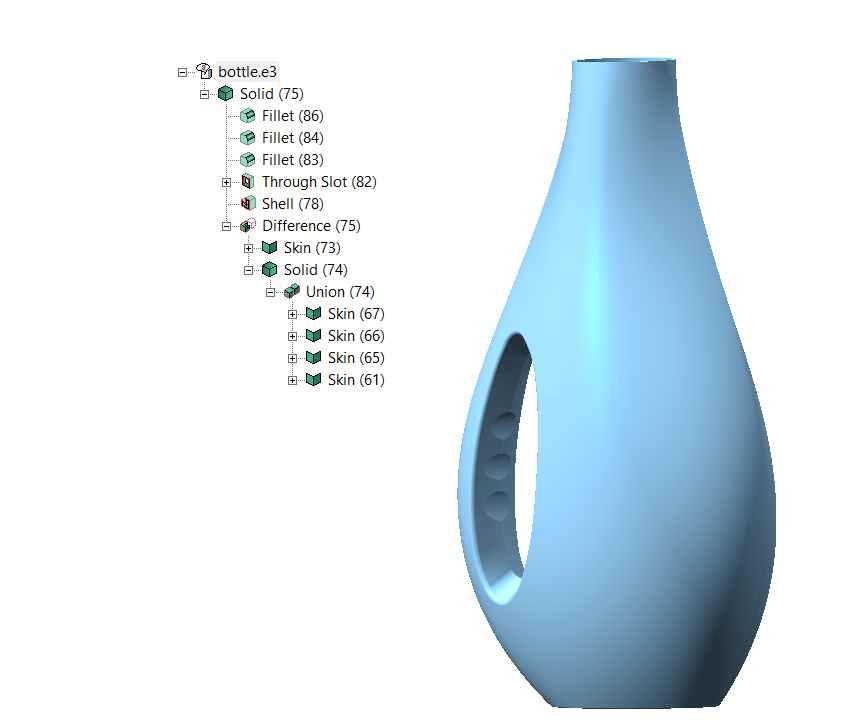 For example, let’s pretend we need to modify the curvature of the bottle shown in the picture above, where there are already some solid features that we’d like to keep. In particular, we don’t want to lose the handle’s details after changing the solid’s global surfaces. 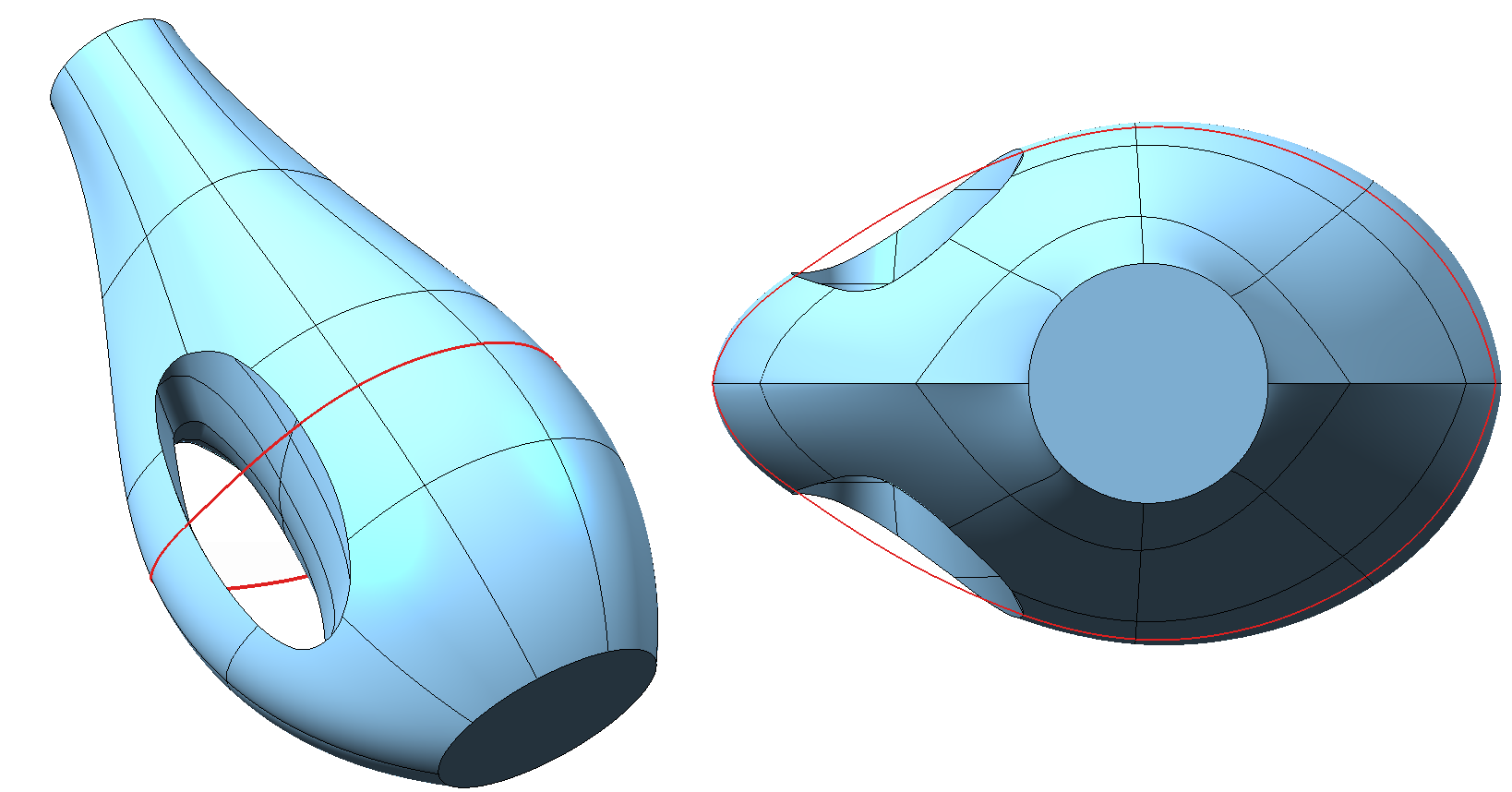 The boundary curves derived from the main surfaces define the style of the finished product and can be kept as initial condition for modification rules.
In fact, the Zone Modeling commands, operating in the GSM environment, present a structure similar to the Global Shape Modeling ones, with entities to be preserved and to be matched thanks to a set of preserving and matching conditions and quality check functions and accuracy tools for evaluating the result.

After selecting the faces close the curve to modify, the AutoPreserving button enables you to automatically apply the preserving constraints along the borders of the selected faces. Then constraints will be applied to boundaries curves according to how they are interpolated with the other solid’s faces and according to the constraint conditions chosen. 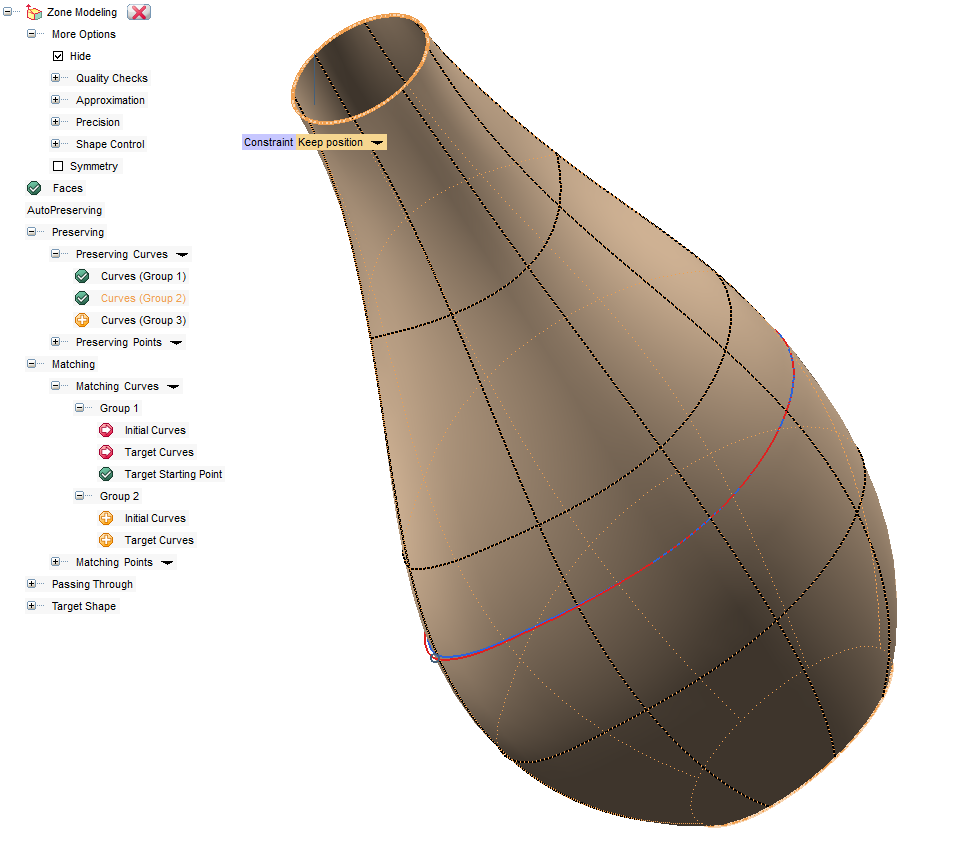 After applying the command, we can notice that the bottle has changed according to the new silhouette we have defined.

Let’s now switch to the potentialities of the Zone Draft, which allows you to add a draft angle to geometries with a complex topology that would require a long time for the redesign.
For example, let’s add a small draft angle to compensate the solidification shrinkage of an object with fillets and maybe imported with a standard format such as STEP. 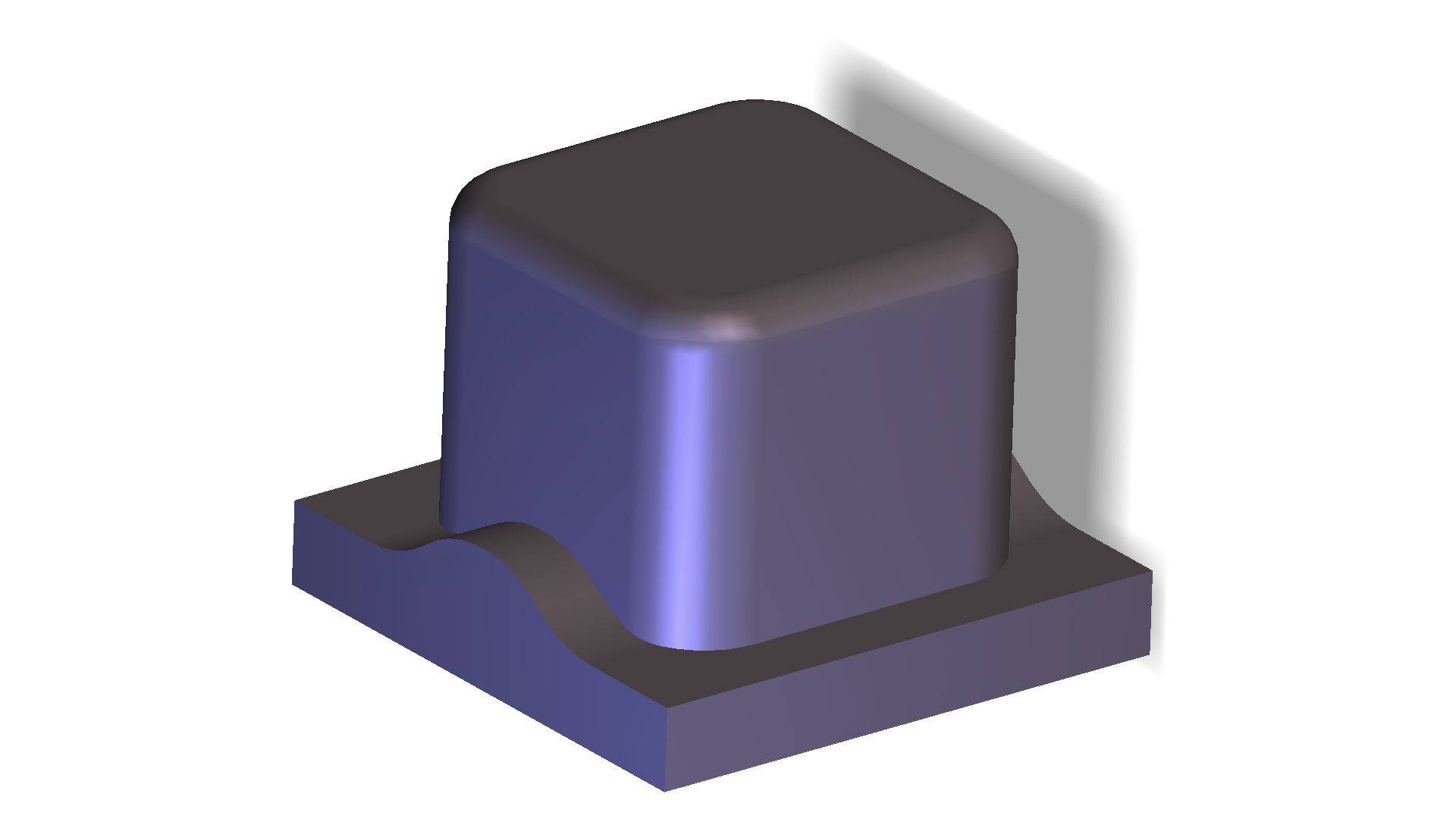 Unlike the Draft Angle command, with the Zone Draft you can add a draft angle without the need to remove the fillets already present both at the bottom of the object and at its top.
This command is much simpler compared to the Advanced Zone Modeling command; therefore, it is fundamental to correctly select the direction about which the angle is to be applied and to define the angle itself. 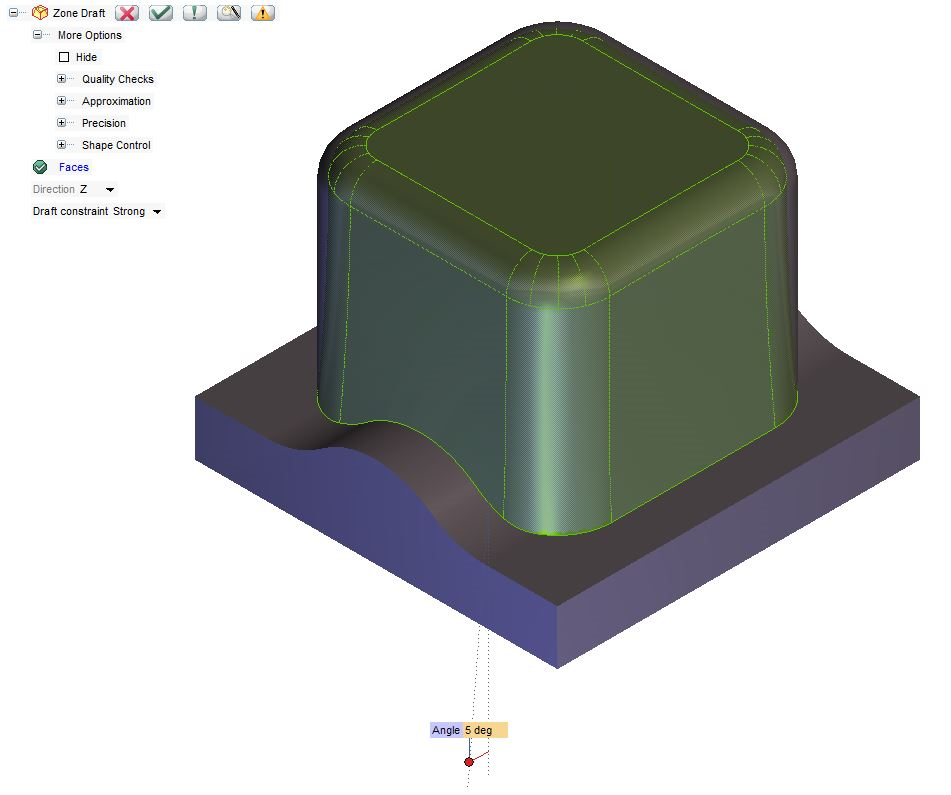 Another remarkable option offered by this command consists in assigning a Draft constraint, which can be strong or weak.
The “strong” drafting method is more suitable for mechanical parts: in fact, the new generated surfaces strictly maintain the positional constraints assigned.
The “weak” Draft constraint option makes the most of its potential in the industrial design field instead, allowing you to create smoother surfaces. 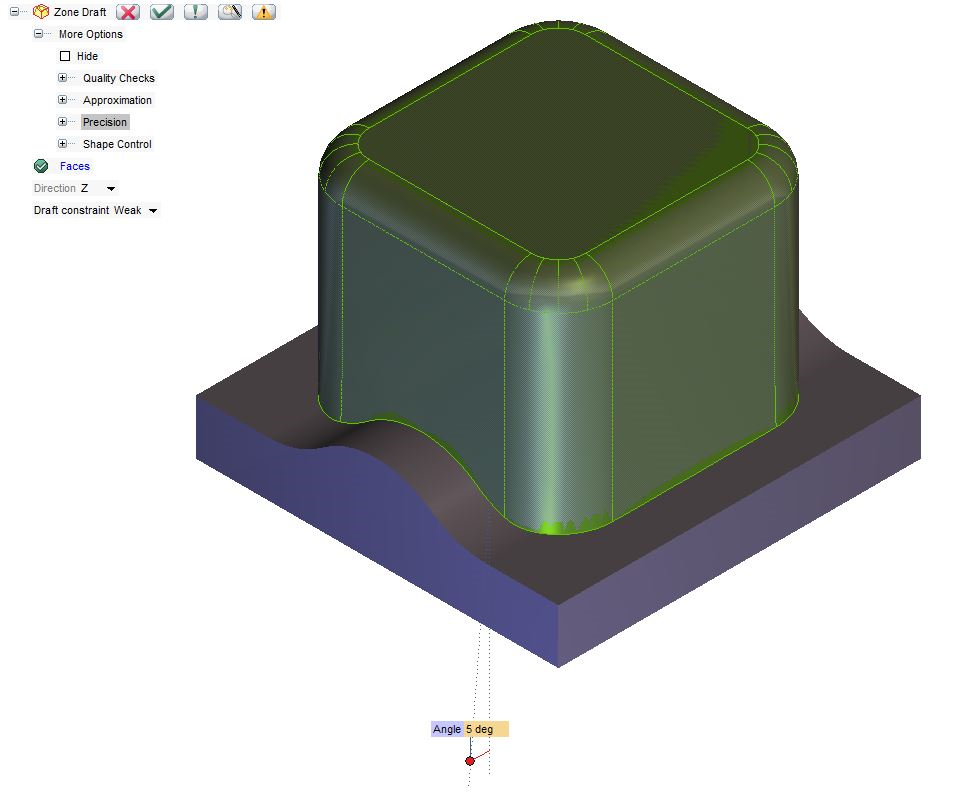 Let’s conclude this excursus on Zone Modeling with a smart advice: if you interrupt the Zone Draft (or Zone Modeling) command, your selections and settings are not lost: they are “frozen” in order to enable you to use them again. Thanks to the Restore Selection button, all the selections you made and the settings you defined last time you used the command will be restored, enabling you to go on with no need to repeat those selections/settings. This can be really useful in those complex situations where the operation might take a long time.